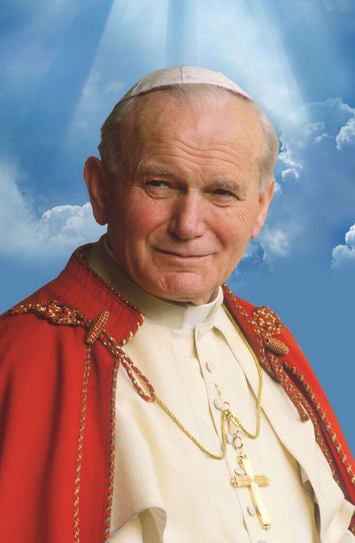 John Paul II was the first non-Italian pope in 455 years. In time, he made pastoral visits to 124 countries, including several with small Christian populations. John Paul II promoted ecumenical and interfaith initiatives, especially the 1986 Day of Prayer for World Peace in Assisi. He visited Rome’s main synagogue and the Western Wall in Jerusalem; he also established diplomatic relations between the Holy See and Israel. He improved Catholic-Muslim relations, and in 2001 visited a mosque in Damascus, Syria

His pontificate was the third-longest ever and who was canonized just nine years after his death, making his the shortest canonization cause in modern Church history.

The final chapter of John Paul II’s pontificate, however, was perhaps the most countercultural. Today, we live in an age that glorifies physical beauty and youth and that is afraid of suffering. In most Western countries, the vast majority of children with Down syndrome are killed in the womb. There is growing support to legalize euthanasia not only for the terminally ill, but also for those who simply have become weary of living. On the contrary, John Paul II embraced his suffering and illness from Parkinson’s disease and other ailments. His disease and death were very public. This resonated in hearts around the world, judging by the millions who flocked to Rome in the spring of 2005 to attend the biggest funeral in human history.

Pope Benedict XVI beatified John Paul II in 2011. He was canonized with Saint John XXIII by Pope Francis in Rome, Italy on April 27, 2014, a Divine Mercy Sunday, an observance that he established on April 30, 2000.

October 22 was chosen as his feast day to remember the anniversary of the liturgical inauguration of his Papacy in 1978.

Saint John Paul II was referred to as “a passionate witness to Christ from his childhood to his last breath.”

Many Filipinos are familiar with Saint John Paul II as the Philippines was privileged to have been visited by him twice, first in 1981 and then, in 1995, to attend the 10th World Youth Day celebration. Known as the patron of WYD, which he started in 1984 with a the holy mass that he officiated on Jan. 15, 1995, at the Rizal Park in Manila was attended by about 8 million people.

Oh, St. John Paul, from the window of heaven, grant us your blessing! Bless the church that you loved and served and guided, courageously leading it along the paths of the world in order to bring Jesus to everyone and everyone to Jesus. Bless the young, who were your great passion. Help them dream again, help them look up high again to find the light that illuminates the paths of life here on earth.

May you bless families, bless each family! You warned of Satan’s assault against this precious and indispensable divine spark that God lit on earth. St. John Paul, with your prayer, may you protect the family and every life that blossoms from the family.

Pray for the whole world, which is still marked by tensions, wars and injustice. You tackled war by invoking dialogue and planting the seeds of love: pray for us so that we may be tireless sowers of peace.

Oh St. John Paul, from heaven’s window, where we see you next to Mary, send God’s blessing down upon us all. Amen.